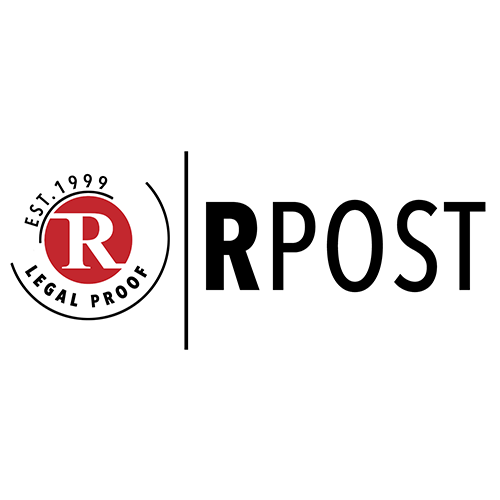 LOS ANGELES, CA — May 9th, 2012 – RPost, the inventor of Registered Email services, announced today that the US Patent Office has concluded the RPost ‘219 proof of delivery patent is patentable with all 89 claims deemed valid after re-examination.

In 2011, RPost brought patent infringement lawsuits in Federal Courts in California, Texas and Virginia that include the ‘219 patent (US Patent 6182219) and in some cases additional RPost patents. These suits were brought against Swiss Post, Canada Post, ZixCorp, Docusign, Adobe Echosign, RightSignature, Farmers Insurance, and Telarix, among others. Jury trial dates have now been set for the cases in the Eastern District of Texas for August 2013.

“We are pleased the patent office has interpreted this RPost patent in the manner in which we always have, a patent on proof of successful electronic transmission,” states RPost CEO Zafar Khan. “We have heard that those who we have sued for patent infringement are putting out false statements to their customers claiming the RPost patents as not novel and invalid. This Patent Office re-examination conclusion delivers a clear message of novelty, patentability, and validity over all known prior art.”

Under US patent law, whoever without authority makes, uses, offers to sell, or sells any patented invention, within the United States, or imports into the United States any patented invention during the term of the patent therefor, infringes the patent. Further, whoever actively induces infringement of a patent shall be liable as an infringer (35 U.S.C. 271). “This should serve as a signal to not only those companies that we have sued for patent infringement, but also their end users and resellers; stop infringing, assess your situation and examine your indemnifications. We do intend to enforce our patent rights everywhere,” adds Khan.

About RPost:
RPost has set the standard for legal electronic messaging and document services with its patented Registered Email services for delivery proof, compliant message encryption and legal electronic signatures. RPost services are designed for industries such as insurance, financial services, legal, real estate, telecommunications and manufacturing where the speed of contract execution, data privacy, or court admissible email proof are a business requirement. Winner of the World Mail Award for security 2011, RPost is in use within the U.S. and international Governments, global F500 companies and endorsed by influential American Bar associations. RPost, founded in 2000, has been granted 36 patents worldwide and operates in 8 languages. To use RPost services, please visit www.rpost.com.