You are here: Home/ Blog / How To Know if Someone Read Your Email in Another Country Where it Has No Business

Get visibility into who may be watching your email so you can immediately re-establish your privacy.

Netflix has scored a big hit with The Watcher, as the show has logged over 850 million viewing hours since it debuted a month ago. The Watcher tells a familiar story about a young family moving from the city to a nice, leafy suburb in the hopes of having a quieter life. The problem, without giving away too much, is that the house they buy comes with a rather long and mysterious backstory.

Within a week or so of moving in, the family starts receiving strange, untraceable letters from “The Watcher” who creepily states that he/she will be keeping tabs on them for as long as they occupy the house. The show is loosely based on a true story that was first reported in New York magazine in 2018.

The popularity of the show is a clear signal that, be it pandemic-induced paranoia or increasing concern over the emergence of the “surveillance state”, a lot of people have privacy (or lack thereof) on the brain.

And speaking of privacy as it relates to email security: one of our customers recently received an Email Eavesdropping™ alert indicating that a copy of an important client email was opened in China where it had no business being opened. Now, we all certainly buy and use countless products made in and shipped from China, but do we expect our email to be viewed — or perhaps better said, be eavesdropped on — by someone in China? And in a wrinkle befitting The Watcher, the client/recipient (the person being eavesdropped on) was an individual using a Mac computer with personal email. 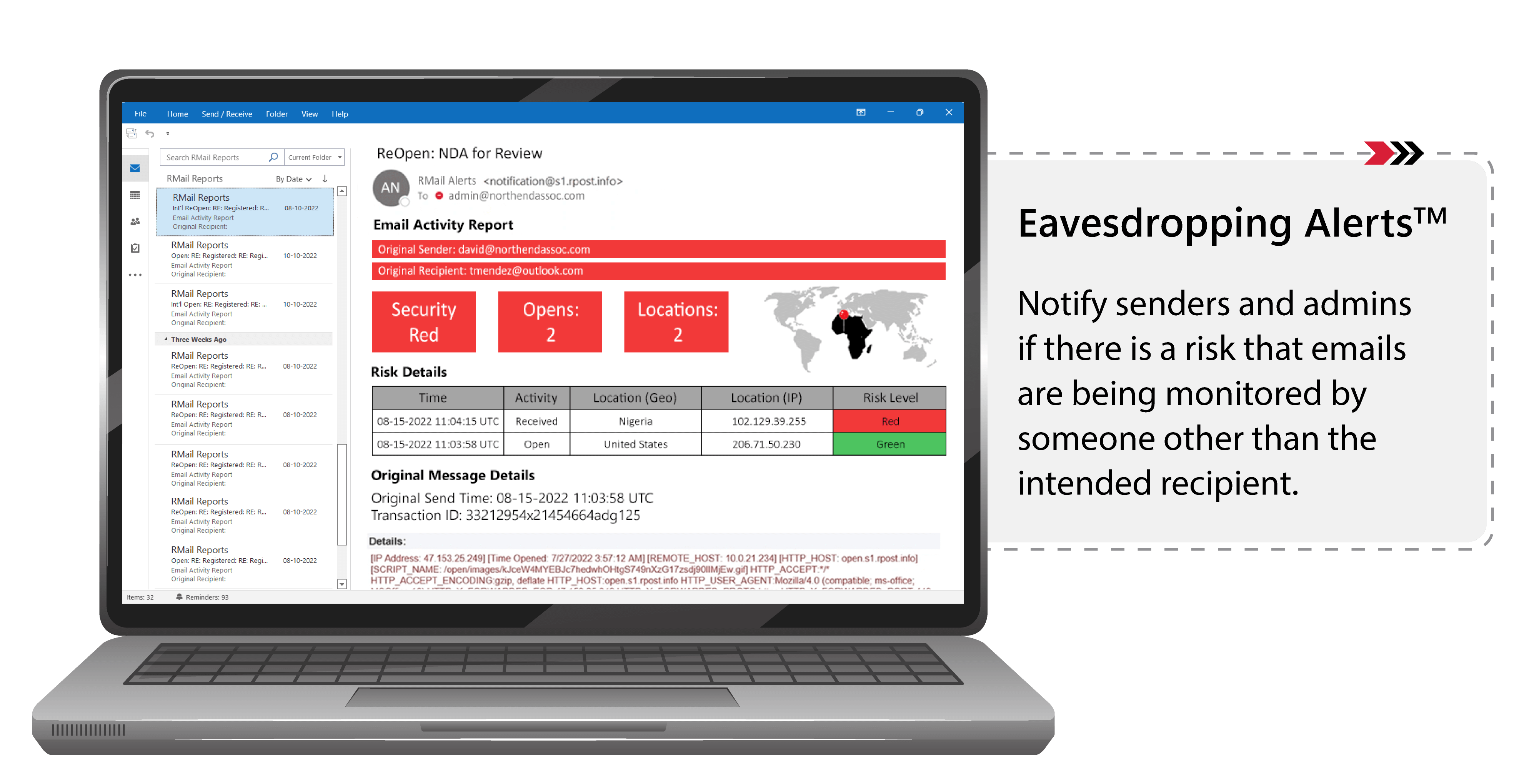 The sender shared the Email Eavesdropping™ alert with the recipient, and it included all the forensic metadata about the eavesdropper. Without this alert, the only way to obtain this info would be to work with the email recipient’s IT department, assuming they’re even equipped to or aware of how to find this type of intrusion.

Once the recipient is made aware of the eavesdropping, they ought to immediately start the process of updating email and other vital passwords, thinking about which accounts are most at risk or can cause the most damage. Since all other accounts can have passwords reset by way of email, it is important to act fast once this breach is uncovered.

As we’ve mentioned so many times this year, Big Brother-esque digital eavesdropping by cybercriminals or state entities is the biggest trend today in cybercrime according to the FBI. It is responsible so far for $43 billion in stolen money attempts with $2.4 billion in successes, with each attack garnering tens or hundreds of thousands of dollars a pop.

The good news is that RPost has developed these Email Eavesdropping™ alerts to tell you in real-time if those with whom you are communicating are sharing your email with others (knowingly or unknowingly). It will even tell you if your email is being read in one of the cybercriminal hotbed regions of the world (like China). This is powerful stuff that our tormented family from The Watcher could have used: visibility into who is watching them so that they can take actions to re-establish their privacy.

So, think of RMail and its Email Eavesdropping™ alerts as necessary Watcher-proofing for the digital age. Please contact us to learn more.

Proper Look/Design of Email Emphasizes the Importance of Message

What does BEC Stand for?